As illustrated in a simulated event at Immaculata University on Oct. 18, when disaster strikes, first responders—whether seasoned EMTs or eager-to-learn nursing and athletic training students—brush fear aside and begin acting to save lives.

Seventeen students had been assigned to act out different clinical conditions and injuries, while three Master of Athletic Training students and two Bachelor of Science in Nursing students served as first responders, and 30 more B.S.N. students worked in emergency room settings. The student actors took their roles seriously, honking horns, screaming for help and demanding to know if their friends were OK. Fake blood and a few fake bones protruding from limbs added gravity to the experience, and Immaculata communications staff created a video of the simulation, presenting it in the form of a news broadcast.

“I wanted them to be able to appropriately triage patients during a disaster simulation and provide care based on that triage level and patient needs,” said Suzanne Wurster, Ph.D., assistant professor of nursing. She and Michele Monaco, D.Sc., exercise science professor, along with other nursing and athletic training faculty, collaborated to design and execute the mass casualty simulation. Emergency medical technicians from East Whiteland Township also participated, working alongside faculty to coach students as they provided care.

“The ability to quickly determine life-threatening injuries and treat them accordingly provides lifesaving treatment,” Monaco said. As one mock patient had an open femur fracture with immense arterial bleeding, Monaco said, “Our students were able to determine this injury takes priority and quickly apply a tourniquet appropriately to stop the bleeding.”

Students used a color system and tags to categorize the urgency of mock patients’ needs—green for patients with minor complaints; yellow for patients with serious injuries who could still breathe and speak; red for patients who needed immediate attention for severe problems, such as unconsciousness, respiratory distress or neurological symptoms; and black for victims who did not survive the accident.

“Our students were able to determine the injuries with very little prompting,” Monaco said. “They were able to identify head injuries, fractures, dislocations, disorientation, and various types of bleeding.”

The first responder students took mock patients by stretchers and wheelchairs into Immaculata’s simulation labs, each of which had a designated triage color, where nursing majors reviewed patients’ tags and provided treatment. Nine nursing faculty members served as doctors and shared mock patients’ simulated vital signs and test results with the students, inviting them to make decisions based on their observations and the clinical data they received. 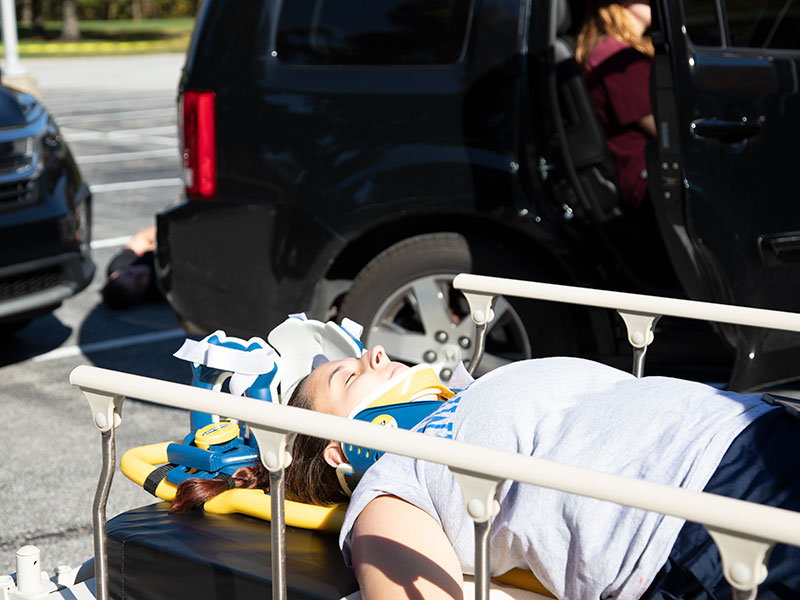 After the simulation ended, the nursing faculty and emergency medical services members debriefed with the students in a nursing leadership class. Matt Cole, EMS captain, congratulated students on doing a great job in the midst of the chaos. Because a few mock patients died as part of the simulation, he reassured students that it’s OK to have a hard time with losing people. “Ask for help if you need it,” he said. “There’s no shame in that. Mental health is important.”

The nursing faculty complimented students on their work and provided some reminders. Assistant Professor Lee Siwula, Ed.D., praised the students in the red triage room for staying calm as they called doctors, checked vital signs and followed the proper protocol for spinal cord injuries without needing her guidance. At one point, she noted, two nurses went to go get something, leaving their mock patient alone. She coached the students on the importance of at least one nurse staying with critical patients to monitor them and lend aid if necessary.

Assistant Professor Sandra Nolan, Ph.D. and associate faculty member Denise Shelmerdine commended students for figuring out which needs to prioritize and encouraged students to assess patients about every 10 minutes, checking blood pressure, neurovascular function and other signs and symptoms. Likewise, Assistant Professor Charity Adedokun, Ed.D., observed that students communicated well with the doctor and each other, conducted appropriate tests, asked patients about allergies and about what happened during the accident, and splinted a broken limb right away.

When Wurster asked students to reflect on their takeaways from the simulation experience, she received feedback indicative of the training Immaculata nursing students receive. One student shared that although she initially focused on treating a leg fracture, she quickly realized through additional testing and observation that he had abdominal bleeding, a less obvious but life-threatening condition that needed immediate attention. Another recalled his training to “treat the patient, not just the numbers” after realizing his mock patient’s oxygen saturation was fine, but respiration was shallow and declining.

Immaculata offers a variety of health care programs that equip students with the knowledge and skills to provide holistic, patient-centered, evidence-based care. Immaculata’s undergraduate nursing students consistently achieve high pass rates for the nursing licensure exam (NCLEX-RN®), with 90.48% of students in the 2021-22 school year passing the exam on their first try. Immaculata’s first class of Master of Athletic Training students will graduate this spring and take their athletic training certification exam after completing coursework and six clinical education experiences to learn to prevent, diagnose, and treat various musculoskeletal and medical conditions.