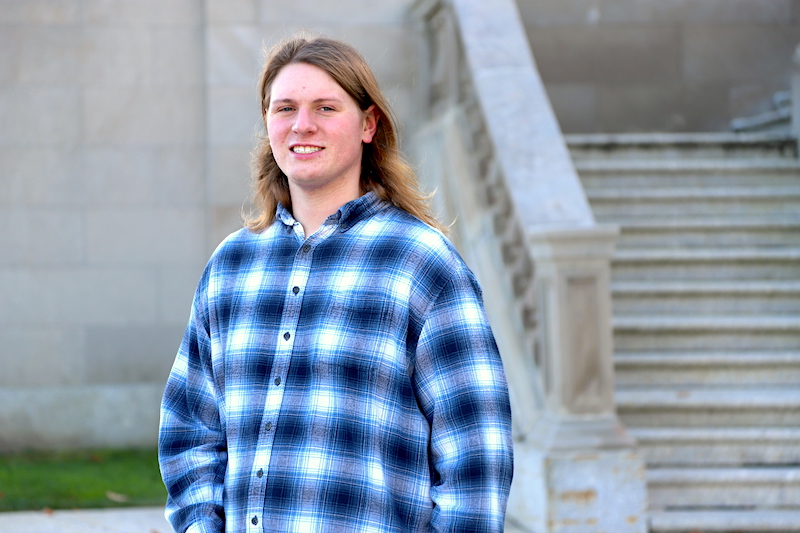 Take Vinnie Damiri ’23 camping with friends and play Led Zeppelin or some Charlie Parker tunes and he is literally a “happy camper.”

Choosing public relations/journalism track, within the communication major, Vinnie is interested in a writing career. With ample opportunity in high school writing for the student newspaper, and especially now as a college student, he can tell that he has grown tremendously as a writer. While taking an introductory course in journalism, Vinnie explored the fundamentals of journalistic writing and discovered appreciation for professional reporting. On the creative writing side, the Poetry Writing class provided a new fascination for the various and unique styles of poetry.

Still unsure of what type of writing to pursue after graduating, he has plenty of time to explore with writing-based internships and guidance from his academic advisor, Sean Flannery, Ph.D., professor of Communication.

Vinnie says his transition from high school to college was a little rocky for the first month. He acknowledged that making friends helped ease the transition. “Making friends and finding the group that you belong with—as well as socializing with others—is very important as you begin college,” he emphasizes.

He is determined to succeed and part of that includes being involved on campus. As a staff writer for the Immaculatan, the student newspaper, he has discovered an audience interested in music that inspires his reporting. Outside academics, he personally enjoys musicians from the 20th century that reflect foundational bearings in rock music from the 1960s and 70s. He is a member of the gaming club and is especially adept at Nintendo video games. Also serving as an ambassador, Vinnie understands and can relate to the needs of incoming students. He encourages them to be open-minded, and to change and grow as college students.

As an Eagle Scout, he has enjoyed camping since he was eight years old. When not camping with friends, he heads for a hiking trail. His experience as an Eagle Scout allows Vinnie to expand his campus leadership roles with New Student Orientation and as an ambassador. He credits his early leadership position for preparing him to be at ease speaking in front of crowds and to develop ways that he can relate and connect with other students.

The friends that Vinnie has made, both during high school at Cardinal O’Hara and as a college student, serve as role models to him. He finds true inspirations in their values, saying, “They are some of the most hard-working, responsible and respectable people I know.”